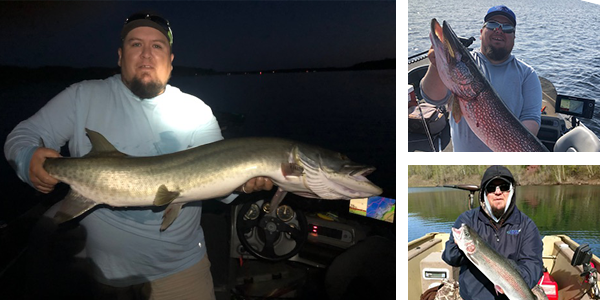 Every passion has roots somewhere along time’s path. Jesse’s passion for fishing began as a child on the shores of Upper Mission Lake, where he was fortunate enough to grow up with a fishing rod in his hand and a family that supported his obsession for being outdoors. Lake life certainly has its benefits, and for many in our area they only get to enjoy them when they are vacationing at their cabins during the summer weekends. On the other hand, Jesse was able to spend every minute possible, open water or ice, developing his skillset and challenging himself to become a better fisherman.

By high school he had worked as a bait supplier for multiple retailers, including an outfitter store in Crosslake called The Guide Shop. Getting to know some of the guys and seeing the “guide life,” if you will, he started to see where his passion and knowledge for fishing could bring him. By his senior year of high school he was working at Oars-N-Mine and things continued to progress from there.

Like any passion there is a progression or evolution of sorts. Don’t get us wrong, he still loves fishing with friends or family and the tug of a fish at the end of the line will always get his heart racing, but putting other people on fish and helping create memories for others is now more enjoyable for him than catching them himself.

In our area we are blessed to not only have a large number of lakes and rivers to fish but also a wide variety of opportunities for multiple species. One aspect of Jesse’s services that continues to grow in popularity is our winter trout fishing on the Cuyuna Range mine lakes. Stream trout (rainbows, brooks and browns) are stocked annually on these lakes and the ice fishing seasons for them have been very productive for both numbers and quality fish. Opportunities are expanding with lake trout management on more than half-a-dozen lakes now being managed for these hard-fighting specimens.

Whether it is open-water or ice, his target species include walleye, trout, northern pike, bass and even some panfish. Even though he targets walleyes, like nearly every Minnesota fisherman, he rarely spends a week fishing where he doesn’t target other species on multiple lakes. Therefore he usually has a pretty good idea of where a good bite is going locally for just about anything you could want to fish.